After 8 Years of Abuse, a Grandmother Receives Help to Find Sanctuary & Stability 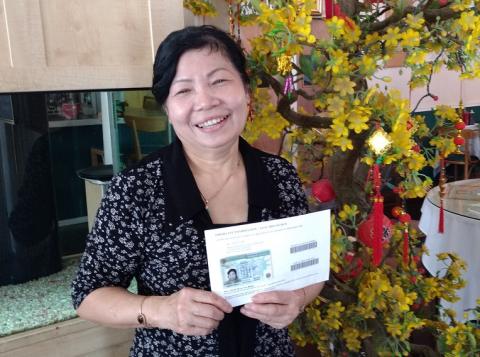 “Huong”, a grandmother from Vietnam, came to the U.S. on a tourist visa in November 2006 to visit her sister, never intending to stay. A few months later she met “Tung” who was very charming. The relationship progressed quickly, and Huong agreed to marry him and stay in the U.S. Tung then  promised to petition for his wife to obtain a green card and work authorization, asking her to give him money to apply. Huong gave her husband thousands of dollars for an attorney but Tung continually postponed the application process, even after Huong’s visa expired.

Tung then began to abuse Huong verbally and emotionally. He threatened to call the police to get her arrested or deported if she ever disobeyed him. He also forced Huong to have sex with him and to give him money for gambling. He threatened to hurt her and her family members if she told anyone about his actions.

Huong suffered the abuse for eight years, until October 2015—then it got worse. When Huong learned that her husband had slept with multiple prostitutes, she refused to have sex with him. Tung locked her up in the bedroom without food or water on four separate occasions. The fourth time, her coworkers became concerned and called the police to check on her. When they arrived, the police had to break through the front door and the bedroom door to rescue Huong. The police arrested Tung and charged him with three counts of kidnapping.

Huong was referred to GBLS through an attorney at a partner organization, the Asian Task Force Against Domestic Violence (ATASK). Huong asked for help with a divorce and a Violence against Women Act (VAWA) petition that allows battered immigrants to petition for legal status in the U.S. without relying on an abusive U.S. citizen or legal permanent resident spouse to sponsor their application. Her GBLS attorney agreed to help her with the VAWA petition and worked with her extensively to get the required documents, while the ATASK attorney took the divorce case (that GBLS could not take due to Huong living outside of our service area). The two attorneys coordinated efforts, sharing documents for their respective cases.

One of the critical services Huong’s GBLS attorney provided was to prepare her to testify against her abuser at the criminal hearing. Tung was found guilty of the charges and was sentenced to 18 months in the House of Corrections and two years of probation. The attorney then gathered documentation from the criminal case to submit to U.S. Citizenship and Immigration Services as proof of abuse for the VAWA petition. After two long years, the VAWA petition was approved and Huong was granted a green card. She may now remain lawfully in the U.S. and get support from her network to heal from the trauma she endured.