Summer is often thought of as a time to relax and take a slower pace, but at GBLS we're busier than ever. Between a welcome influx of seasonal interns, significant progress in our legislative advocacy efforts, continuing developments in Washington and beyond, the happy frenzy of the Associates Fund Drive, and having a chance to reflect on our progress in 2017 through our Annual Meeting and the publication of our 2017 Annual Report, summer is an exciting time at 197 Friend Street and 60 Gore Street.

Currently, some of GBLS' advocacy efforts sit on the Governor's desk awaiting signature. As the legal arm behind the Raise Up Massachusetts coalition's efforts to enact Paid Family and Medical Leave and increase the minimum wage, we're proud to see real progress towards fair and equitable employment practices in our state. GBLS was also integral to the recently passed criminal justice reform bill, which will have a significant impact on people's ability to expunge past records and find stable employment, among other provisions.

One of the hallmarks of GBLS is our advocates' passion for making our community better, safer, and more equitable. It's a trait I see in our most senior attorneys and our youngest interns, and sparks the drive that makes both individual case victories and impact advocacy successes possible. Thank you for sharing that passion and these successes with us.

When Iris reached out to Greater Boston Legal Services, she was trapped in her apartment. As the result of a progressive nerve disease, Iris uses a wheelchair and the five steps that led to her apartment door made it impossible for her to leave her home. When Iris first moved into her apartment, she could still get around with the assistance of a walker. Over time, however, Iris’ condition worsened, and she became reliant on a wheelchair.

Iris asked her landlord to install a ramp so she could access her apartment, but the one he installed was so steep and dangerous that when Iris tried to use it, she fell and injured herself. Her landlord removed the ramp, and Iris asked him to install a safer ramp or allow her to move into a first-floor apartment without stairs. Iris’ landlord ignored her requests and instead initiated proceedings to evict her for not paying rent, even though she paid rent every month.

After hearing Iris’ story, GBLS housing attorneys took her case and got to work. Iris’ attorney filed a motion to dismiss the landlord’s eviction case and filed an emergency motion to install a safe ramp. The Court dismissed the eviction case against Iris, so she could stay in her apartment. Without a ramp, though, Iris was stuck in her home.

Over the following months, Iris’ GBLS attorney and lawyers from the Disability Law Center (DLC) worked with an architect to design a safe ramp to Iris’ apartment. The landlord argued that if the ramp was installed, it would endanger the structural integrity of Iris’ building. After GBLS showed that the landlord’s argument lacked merit, the landlord finally agreed to install the ramp.

The same day, Iris’ landlord finally offered her an accessible first floor apartment in another building. GBLS negotiated with the landlord to make sure the rent was within Iris’ budget, and she accepted the offer. After verifying that Iris’ new apartment was accessible and affordable, Iris moved into her new home.

After settling in to her new apartment, Iris invited her GBLS attorney to visit. Iris was so excited that she could come and go as she pleased, clean, cook, and live her life. Iris is especially grateful that because her new apartment is fully accessible, she can finally play outside with her grandchildren.

On May 15th, GBLS welcomed law firm and corporate legal department donors to a special reception at Fenway Park. We celebrated the exceptional generosity of the Boston legal community, including 2017 standout stars Jones Day, Santander Bank, and the individual members of the Fidelity legal department. To cap off the festivities, attendees got a behind-the-scenes tour of Fenway Farms and a visit to the Green Monster. Thank you to everyone who contributed to the success of GBLS' fundraising drives in 2017! 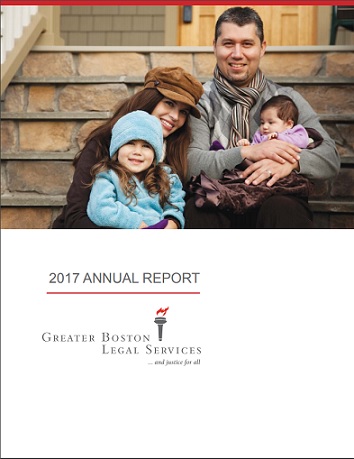 We invite you to read GBLS' 2017 Annual Report to learn more about our challenges and successes last year. Read about how wealth inequality impacts our clients, some of our wins in 2017, and acknowledgements of the many people who help make our work possible.

If you would like to receive a hard copy of the report, please contact Ana Cruz, Director of Development, at acruz@gbls.org.

As a recipient of a $100K for 100 grant from Cummings Foundation, GBLS has benefited greatly from both the financial investment and the public awareness that goes along with Cummings Foundation's support. We're pleased to support founder Bill Cummings' new memoir, "Starting Small and Making It Big: An Entrepreneur's Journey to Billion-Dollar Philanthropist," which chronicles the philanthropist's career and legacy.

In "Starting Small and Making It Big," Bill Cummings describes how hard work and diligence can lead to success, and how that success can foment fundamental justice and genuine structural change along the way.  Sales of the book go to support Cummings Foundation and future grantees, and copies can be purchased here.